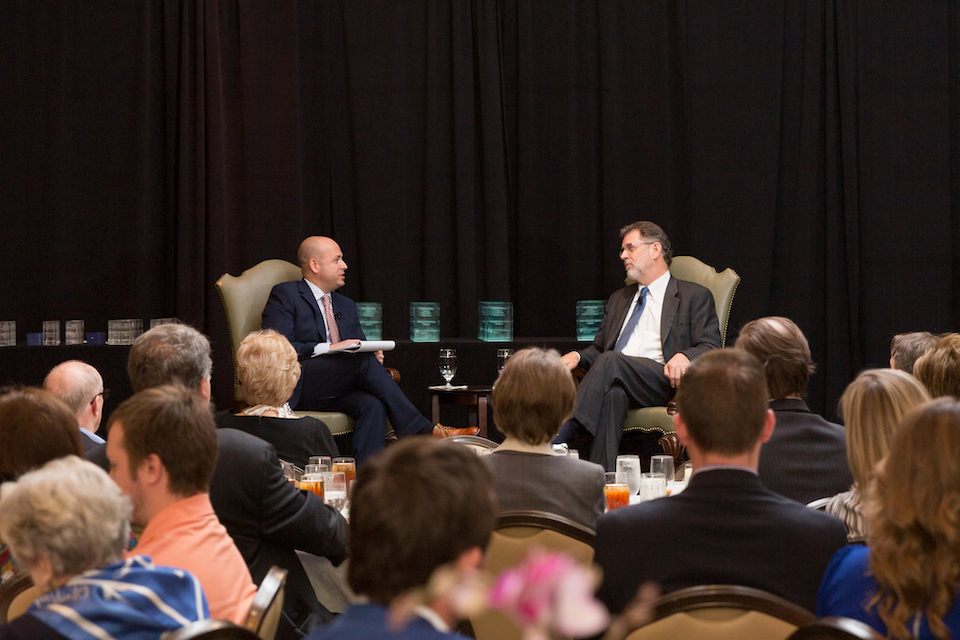 Two C-level executives from two well-known Dallas-based brands got together Feb. 4 at the Dallas Country Club, to chat about careers, corporations, community and character.

The annual Dave Perry-Miller Real Estate Top Producer Awards Luncheon provided an ideal opportunity for Chris Kelly, president and CEO of The Ebby Halliday Companies, to visit with John J. Stevens, senior executive vice president and CFO of AT&T Inc. The audience for the talk comprised 250-plus agents and staff members eager to hear what the two respected businessmen had to say.

Prior to their chat, the group heard from Ebby Halliday CFO Ron Burgert who recapped 2018’s numbers. The DPMRE brand did just shy of $2 billion in sales volume. Burgert also cited the parent company’s renewed dedication to being a “one-stop shop” through the promotion of its core services – mortgage, title and insurance – bringing even more value to clients.

Chairman Emeritus Mary Frances Burleson also spoke about the Ebby Halliday Foundation, which continues its namesake’s legacy of philanthropy and service to the community.

Kelly and Stevens then took the stage for an informal interview, with Kelly asking the questions. He first inquired about the trajectory of Stevens’ career.

“I am here today because of constant professional development,” said Stevens. “I invested in myself but also had others invest in me. I found that successful people are quite willing to share about how they got where they are. So I listened a lot, too.”

Kelly pointed out the contributions AT&T made to the revitalization of downtown Dallas. Stevens agreed relocating the headquarters there in 2008 was bold, especially in a recession. But they had just finished two major mergers, “gone international” and needed to recruit and retain quality talent.

“Dallas is business friendly, and has two great airports,” said Stevens. “Coupled with the reasonable cost of living, infrastructure and the fact we already had seven buildings downtown, the move made sense.”

“On a personal note, it was our DPMRE agent who really helped my wife get connected after our relocation,” he added.

The two then acknowledged their companies’ shared ideals: integrity and honesty.

“No matter the market,” said Stevens, “operate with integrity every day. You can’t get it back once it’s gone.”

“So much of what John had to say was applicable to our agents and the way they conduct their daily business,” said Kelly. “It was a relevant and inspiring conversation.”

Read more on the blog:

Home Services of America CEO is Industry’s Most Powerful Leader