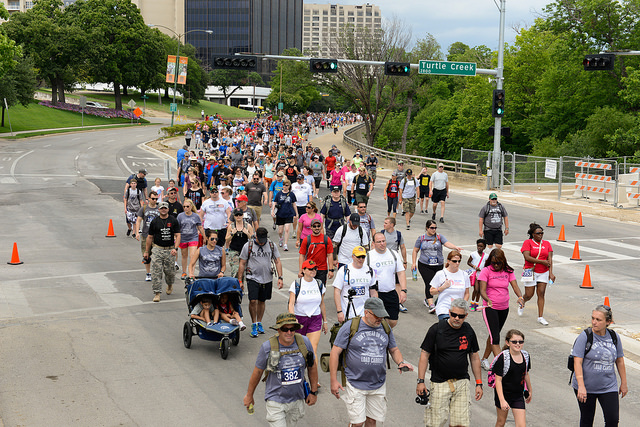 The 2014 edition of the Dallas Memorial March began along Turtle Creek Boulevard.

To many people, Memorial Day is just an excuse for a three-day party. But others recall its true purpose: remembering people who died while serving in our nation’s armed forces.

The goal of Carry The Load is to get more people to observe the holiday’s true meaning. The Dallas-based nonprofit hosts a series of events in which participants march while carrying something as light as a photograph or as heavy as an equipment bag — the weight doesn’t matter, as long as the marcher honors those who made the ultimate sacrifice.

“It’s one small way we can give back to our nation’s finest — not just our military, but our police officers and firefighters as well,” said Edward Slater, a Dave Perry-Miller Real Estate agent who serves on Carry The Load’s board of directors.

Carry The Load has raised $4.4 million since launching in 2011. Funds go to a series of nonprofit beneficiaries such as the Gratitude Initiative and the Assist the Officer Foundation. Donations are welcome, but participants can also raise money by having friends and family members sponsor their march.

The National Relay — a 2,000-mile, on-foot journey to Dallas — began last week in West Point, N.Y. In a few days, Slater will participate in the Atlanta-to-Chattanooga leg.

The Dallas Memorial March will take place during a 20-hour, 15-minute span May 24-25 in Reverchon Park and on the Katy Trail.

Participants can walk as little or as far as they would like, and they can carry as little or as much as they want. There are no obligations to walk any specific distance or carry any certain amount of weight. This event is simply an outward expression of our appreciation for those who have served all of us … past, present, and future.

“I’d love to see as many people on the Katy Trail as possible on Memorial Day,” Slater said. “Forgive me if I don’t have much to say that weekend, as I’ll be carrying quite a load myself, but know that you’ll have my appreciation.”

To support Slater’s participation in Carry The Load, click here. 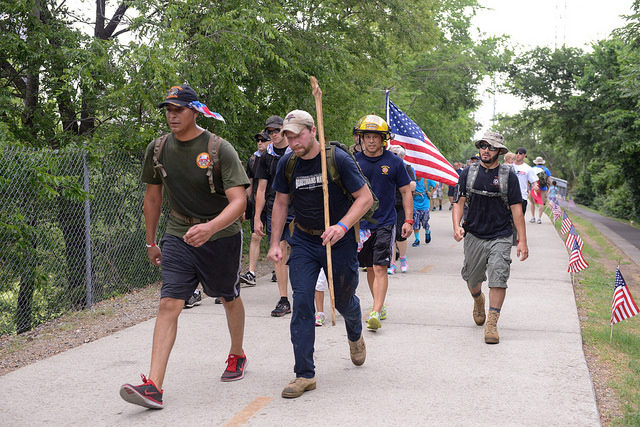 Firefighters were among the participants marching on the Katy Trail last year.