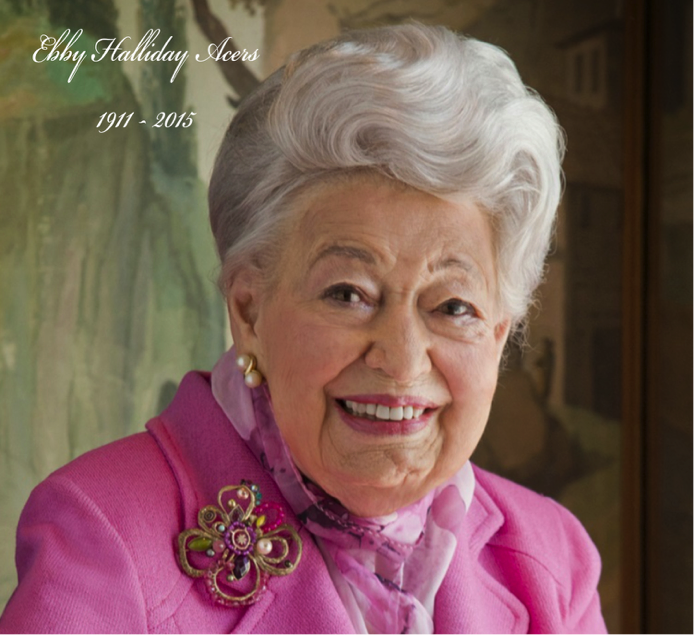 Born Vera Lucille Koch in the small town of Leslie, Ark., on March 9, 1911, the woman who would later take the professional name “Ebby Halliday” was admired worldwide for her ability to combine leadership with femininity and business acumen. Her impact on the residential real estate industry was unmatched. Over the years, Ebby opened the doors to successful careers for thousands of people. Her grace and grit paved the way for generations of women in business.

During the Great Depression, Ebby helped support her family by selling general merchandise and eventually hats at a department store in Kansas City.

When a customer’s husband built 50 single-family spec houses made of insulated concrete, he knew exactly who to call. “If you can sell those crazy hats to my wife, maybe you can sell my crazy houses,” legendary Texas oilman Clint Murchison said to Ebby. Ebby sold all of them and soon changed her product from hats to houses, and the rest was history.

Ebby founded Ebby Halliday, REALTORS® in 1945. Today, the Dallas-based company is the largest independently owned residential real estate services company in Texas and ranks 10th in the nation. The 70-year-old company, with 1,700 sales associates, participated in approximately 19,200 property transactions in 2014 with a sales volume of $6.64 billion.

Ebby’s other great passion was service to the community she proudly called home. She and her company’s philanthropic impact on North Texas cannot be overstated. In 2014 alone, the YWCA of Metropolitan Dallas announced Ebby’s Place, which houses the new YW Women’s Center, and Juliette Fowler Communities announced The Ebby House, a transitional community for young women who have aged out of foster care. Ebby did not have children of her own, but she helped educate and support many young people.

A tireless volunteer, Ebby served the community as president of the Thanksgiving Square Foundation and on the boards of the St. Paul Medical Foundation, the Communities Foundation of Texas, The Dallas County Community College District Foundation and the Better Business Bureau. Among the many organizations in which Ebby was active was the Alexis de Tocqueville Society for United Way, the Dallas Symphony Orchestra Guild and the State Fair of Texas. She served as president of the North Dallas Chamber of Commerce and the Greater Dallas Planning Council and on the Dallas Park and Recreation Board.

Ebby’s dedication to her profession and her fellow man remained constant. This dedication is clearly evidenced in the many honors she received as a result of her civic and professional endeavors. They include the Distinguished Service Award from the National Association of REALTORS® and the International Real Estate Federation, induction into the Texas Business Hall of Fame, induction into the Dallas Business Hall of Fame, the Regional Entrepreneur of the Year Award from Ernst & Young, the YWCA’s 100 Women 100 Years award, and the Linz Award, which is presented annually to a Dallas County resident whose civic or humanitarian efforts benefit the city of Dallas. In addition, Ebby was the first recipient of Executive Women International’s Executive Excellence Award. The Emergency and Chest Pain Center at St. Paul Medical Center Foundation was dedicated in honor of Maurice and Ebby Halliday Acers.

“There is no one associated with residential real estate that I have more admiration and respect for than Ebby Halliday. She had that rare combination of traits: wisdom, leadership, and vision. But she brought all of these traits to everyone she met through a connection of love, and a sincere desire for that person to succeed and be their best. She demanded much of others… but one always wanted to be their best for her because she demanded the best of herself. Add one of the sharpest wits and keen senses of humor, well it’s not wonder that everyone respected her, admired her, and more important loved her so much. It was an honor to be personally associated with a true legend and a lady who was such a visible landmark for the best of Dallas,” says Dave Perry-Miller, Director-Luxury Property Division Dave Perry-Miller Real Estate.