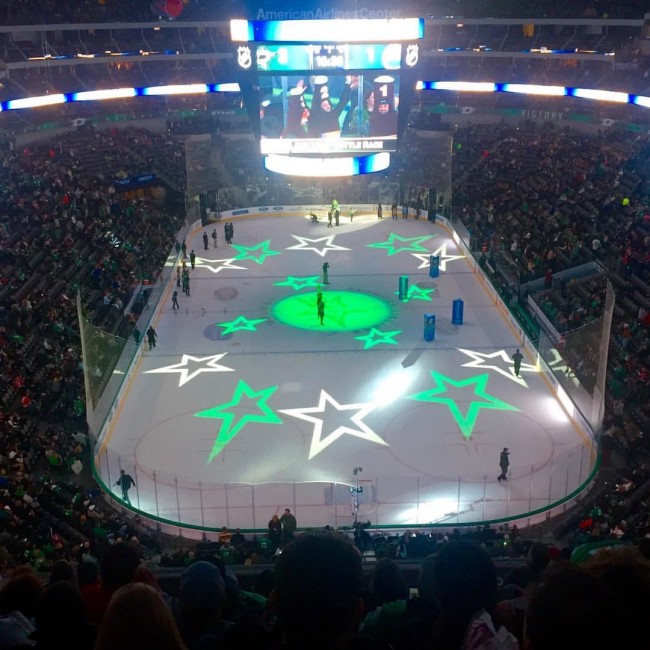 Did you happen to see the stars last Thursday night, January 21, at the American Airlines Center? Yes, there were a few down on the ice, wearing skates and pads, flying around, shooting, scoring and demonstrating their tremendous athletic prowess by drilling the Edmonton Oilers.  But then there were the 1,600 less-obvious stars — those in the arena seats, enjoying Dave Perry-Miller Real Estate’s Annual Client Appreciation Night.

We want to take a minute to talk about them. 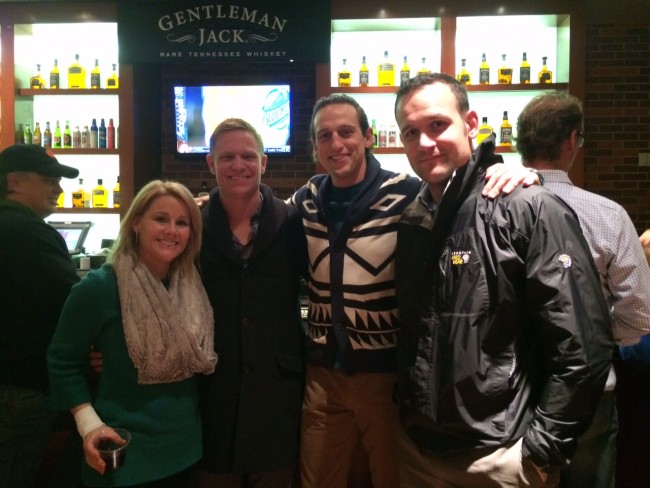 For the third year in a row, we have been privileged to treat the individuals and families who have helped make our business shine, to a special evening watching hockey. 2015 was the firm’s best year ever, with $2.2 billion in total sales volume, so there was just cause for celebration.

Says firm founder, Dave Perry-Miller, “Every bit of that is attributable to the people who place their trust and confidence in our hands when the time comes to buy or sell their home.”

“I don’t know of another brokerage that does something on this scale for their clients,” he continues. “We think it’s the least we can do, especially given that many of our clients consider us their agents for life.”

Broker Associate Julie Provenzano (who is designated as the Official Real Estate Agent of the Stars) helped organize the sold-out corporate event, and also treated her group’s guests to a gathering in the Tequila Patron VIP Lounge beforehand.

“It was a tremendous opportunity to thank our loyal clients for their business and referrals,” Provenzano says. “The Stars are doing really well this year so it just added to the excitement of the night, especially since they got the win.” 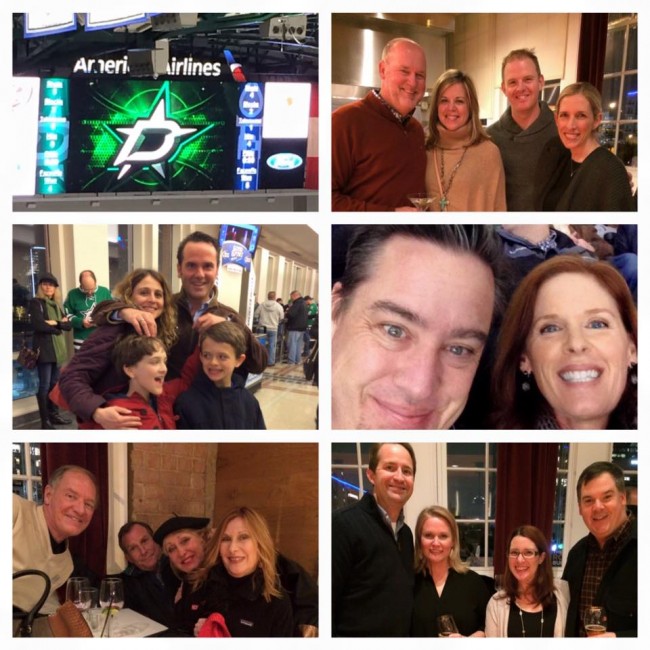 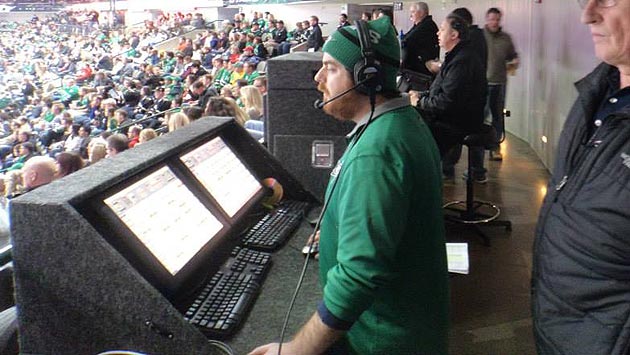 Michael Gruber keeps an eye on the action during a Dallas Stars game. (Photo by Frank Smith)

We’re getting geared up for another season as the Official Real Estate Company of the Dallas Stars. That means we have 41 more opportunities to enjoy the work of the team’s musical director, Michael Gruber, who is the son and brother, respectively, of Dave Perry-Miller Real Estate agents Diane & Becky Gruber. Michael has one of the coolest jobs in town, and he’s so good at it that Sports Illustrated recently published an interview with him.

The Dallas Stars celebrate their shootout victory over the Calgary Flames. (Photo via Facebook)

Being the official real estate company of the Dallas Stars is always an honor, but it’s been especially honorable lately. The Stars’ shootout victory in Calgary on Thursday was their seventh win in eight games, and it put them four points of out a playoff spot with eight games left in the season.

The Stars’ swing through Western Canada continues with games in Edmonton on Friday and Vancouver on Saturday. They’ll be back home Monday for a rematch with the Flames.

When the puck drops on the Dallas Stars’ new season tomorrow night, some things are going to look a bit different.

Forwards Ales Hemsky and Jason Spezza, who were linemates in Ottawa last season, will be filling up the nets at the American Airlines Center. Younger fans will be entertained by the team’s new mascot, Victor E. Green. And for the first time in six years, the Stars will be playing with the confidence that comes from having made the playoffs the previous spring.

But here’s a constant for Texas’ only National Hockey League franchise: For the third consecutive season, Dave Perry-Miller & Associates is the official real estate firm of the Dallas Stars, and Julie Provenzano is the team’s official Realtor.

Those titles are well-earned. Spezza is just one of the many hockey players who have bought, sold, or leased property with Provenzano’s help. Her client roster includes Dallas Stars past (Loui Eriksson, Jere Lehtinen, Ray Whitney) and present (Jamie Benn, Shawn Horcoff, Kari Lehtonen).

“When I was traded to Dallas, I was faced with several new challenges that come with moving to a new city,” said center Tyler Seguin, whom the Stars acquired in a July 2013 trade with the Boston Bruins. “Julie helped educate me on the Dallas home market, and she was patient, extremely knowledgeable, and a true professional. She helped me fine-tune my search and found the best place for my needs.”

If you don’t run into Provenzano at the American Airlines Center — entertaining her clients who don’t play hockey while cheering for those who do — you’ll definitely see her smiling face in the game program. The relationship between the team and Dave Perry-Miller & Associates will also be touted on the arena’s fascia advertising panels, on the Stars’ website, and in mailings to season-ticket holders.

“I can’t wait for the season to start,” Provenzano said. “As great as these guys are as hockey players, they’re even more impressive as people, and I’m hoping they have all the success they deserve this season. Plus, potential playoff bonuses make for good kitchen renovations.”