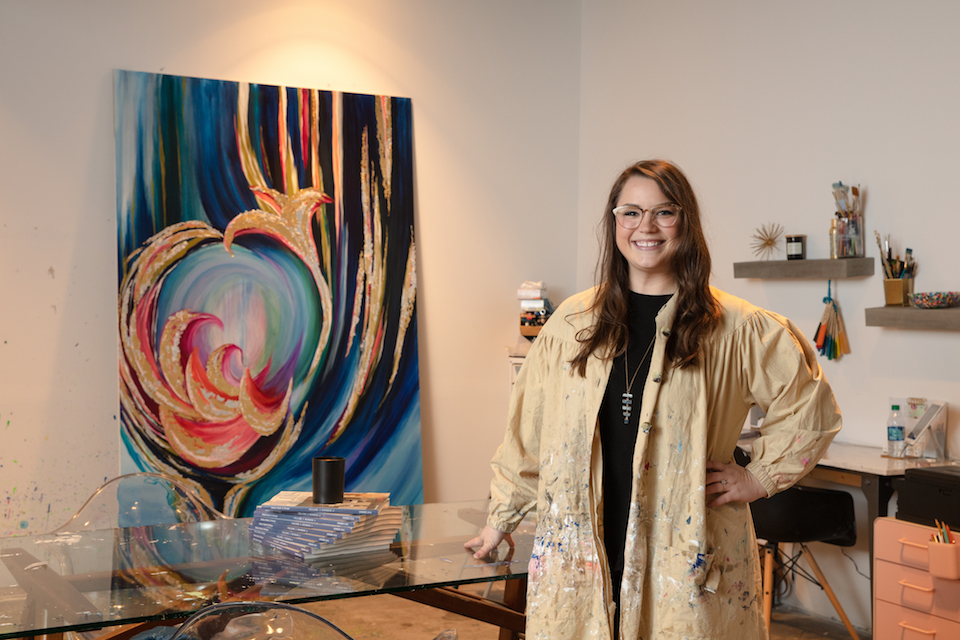 Sarah Todd has the distinct talent of seeing the world a little bit differently.

From views of London’s Tower Bridge to her safari adventures, Todd has the ability of transforming what she sees into abstract visions of bold acrylics and glistening metallics underneath a layer of sleek resin.

It’s her unique portrayal of the world around her that has captured the attention of many Dallas residents. Since she first became a full-time artist about a year ago, Todd has been working nonstop to bring her Midas touch to homes across Dallas and beyond.

“By the end of the year, I will have completed 100 paintings,” Todd told Dave Perry-Miller Real Estate in September.

Her design process and inspirations are featured in DPM’s fall/winter 2018 Fine Home Collection.

Todd is available to create custom pieces at her website sarahtoddart.com.

Read more from the Fine Home Collection on our blog:

You wouldn’t expect an Aggie with a degree in finance to also be a fine artist, but Chad Schulin defies expectations.

The Dave Perry-Miller associate’s art career began innocently enough in 2006, when he bought a house with blank wall space. Initial efforts to fill that space with other people’s art were unsuccessful.

“I knew what I wanted, but I just couldn’t find it,” he said.

So Chad’s entrepreneurial and creative sides joined, as he bought a few canvases and some tubes of acrylic paint and began experimenting. His first painting elicited compliments from friends, which gave Chad the confidence to keep going. Within a year, he’d produced more than 100 pieces.

He eventually transitioned from canvases to acrylic sheets, commonly known as Plexiglas. Painting on Plexiglas requires a completely different technique. He uses a backward painting method, which allows light to flow through the Plexiglas and reflect the 50 to 75 layers of metallic and interference colors throughout.

“It takes patience, detail, and a lot of trial and error, but the outcome is beautiful,” Chad said.

Chad has worked in real estate since 2002, with the majority of that time spent in the commercial field, which meant jetting around the country and assisting Fortune 1,000 companies. He transitioned into residential sales after he and his wife began planning a family. He joined Dave Perry-Miller & Associates in January 2013 and has rapidly excelled.

The firm’s namesake gained firsthand knowledge of Chad’s attention to detail during a tour of 5139 Seneca Drive. While showing off the multi-million-dollar estate in Bluffview, Chad pointed out several fine details, from the specific artist that painted the Venetian plaster to the theater equipment design team and the espagnolette hardware gracing the doors.

“His ability to articulate the architectural and design nuances of the house made me realize how detailed he was — and knowledgeable,” Dave said. “Some people are knowledgeable but short on communication skills; Chad has both.”

That same attention to detail is evident in Chad’s paintings. He always has multiple pieces in production, because he can be adding a layer to one while another is drying. That process translates to his ability to juggle multiple transactions for his real estate clients while ensuring no balls are ever dropped.

If you’d like to see more of Chad’s paintings, visit his website, chadschulingallery.com. But also keep an eye out for him at local art festivals, where his pieces look their best.

“Creativity and details not only differentiate us, they keep life fun,” he said.

This is one of a series of articles focusing on interesting aspects of Dave Perry-Miller associates’ lives. The previous installment was about McKamy Tiner donating a kidney to a lifelong friend.