Heather Guild and Skylar Champion first met through a mutual friend and discovered a joint love for supporting local schools — Skylar previously taught at Bradfield Elementary, and both women were actively involved in this year’s Lakewood Home Festival and Auction Party, which generates funds for Lakewood Elementary School.

“One of my passions is public education,” Heather said. “As a mom and a real estate agent, I know how important it is for our community to give our children access to a quality education, and I want to do all that I can to help.”

But when Skylar and her husband asked Heather to help sell their M Streets home, the two quickly discovered a new shared interest — real estate.

Heather has an eye for quality and impeccable taste. Fortunately, Skylar does too.

“Their home sold within hours after listing it,” Heather said. “Skylar’s home was show-ready and immaculately decorated. She made my job easy.”

Skylar and her husband asked Heather to represent them again when they bought a new home near Lakewood Elementary. With her business setting a record in 2014, Heather faced a conundrum looking forward to 2015: How could she keep growing her business while continuing to provide the personal level of service and attention to detail that her clients have come to expect? Her dealings with Skylar provided the answer.

“I knew she would be amazing at it, just from working with her,” Heather said. “She has such a good eye. And when we were working together, she was so in touch with the market — even in terms of what had sold six months ago — that I knew she would be a fabulous asset to my team.”

Skylar’s mother was a Realtor, so she’d always had an interest in real estate. But was she interested enough to devote herself to it full-time?

“I thought about it briefly, and I couldn’t find a single reason to say no,” Skylar said. “I just knew this was going to be a perfect fit.”

So the two friends have joined forces as the Heather Guild Group, adopting the slogan Heather has long used as a solo Realtor: “Living, Loving, Listing Lakewood.”

“Heather and I are both fortunate to live in Lakewood,” Skylar said. “We know how truly special this community is, and we look forward to sharing that with our clients.”

We all love hosting friends and family for the holidays, and for travelers, a comfortable room makes the home-away-from-home experience even better. From comfy accommodations to beautiful decor, Dave Perry-Miller Real Estate presents four gorgeous guest bedrooms. 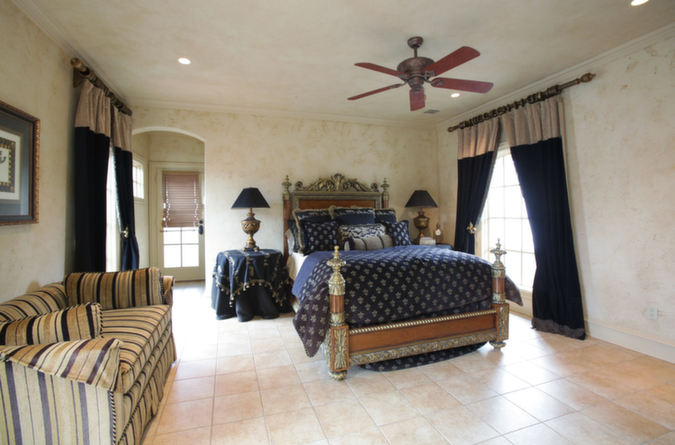 In the Preston Hollow home at 9925 Lakeway Court, there are seven bedrooms and 8.5 baths. This Mediterranean villa features soaring ceilings and plenty of extras such as two laundry rooms and a wine room. This guest room features tile flooring, space for extra seating, and a private entry. 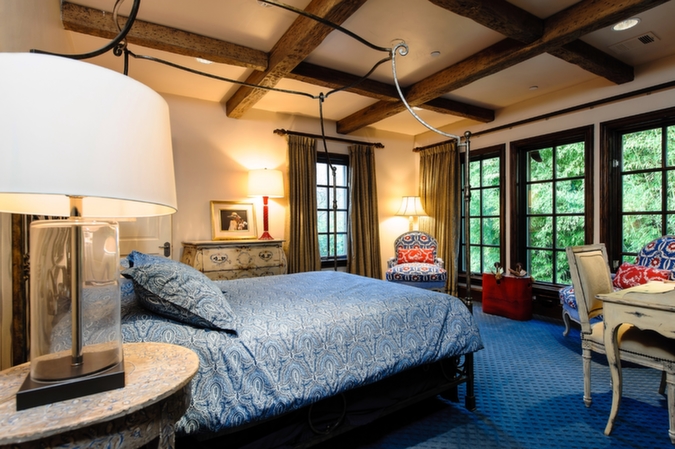 The four-bedroom home at 3900 Stonebridge Drive, located in Turtle Creek Estates, features a guest room with wall-to-ceiling windows, wooden beam ceiling accents, and Berber carpeting in a sapphire hue. The room has its own private bath with bright blue tile accents. 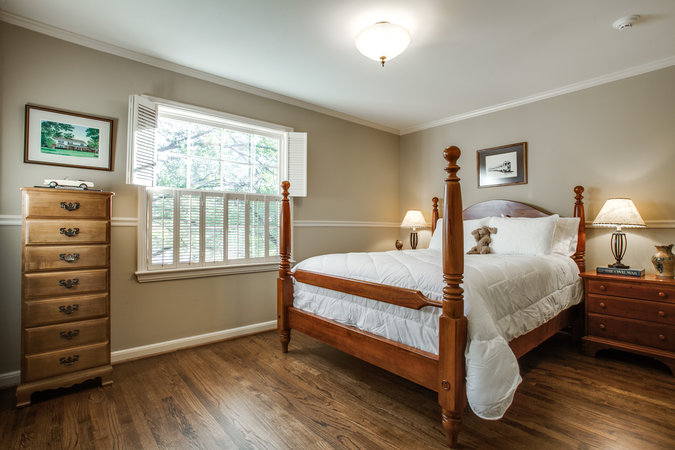 The five-bedroom home at 4428 Lorraine Avenue features a guest room with wood floors, abundant natural light, and enough room for anything your travelers bring. The rooms throughout the home reflect the “French street” classic design and include crown moldings and a neutral color palette. 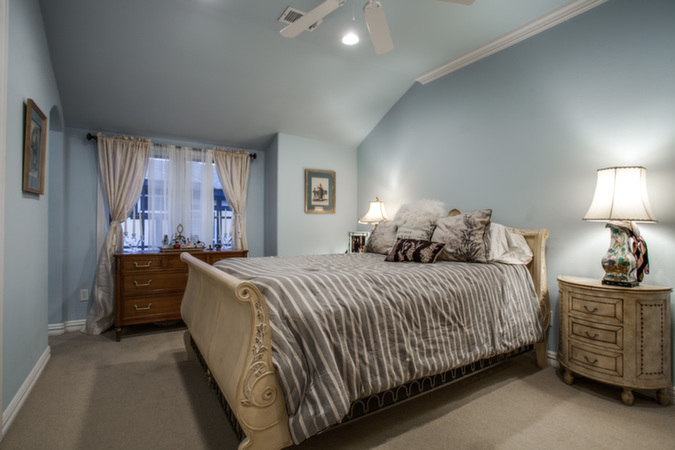 The home at 5227 Monticello Avenue is a stunning Tudor with four bedrooms. This guest room has a quiet, relaxing atmosphere thanks to its unique shape, muted hues on the walls and flooring, and subtle accent lighting.

A version of this story also appears on Culture Map Dallas. 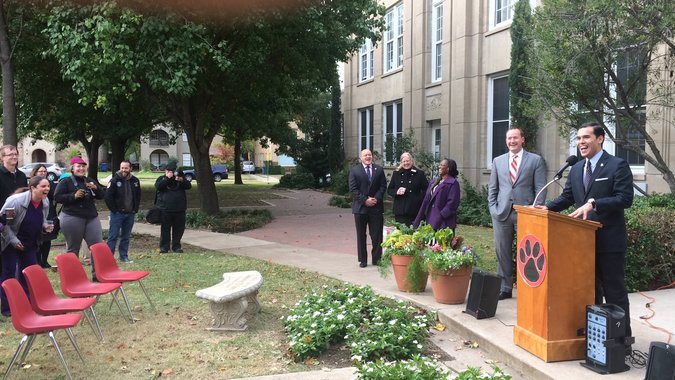 DISD Board of Trustees president Miguel Solis (at podium) and City Councilman Phillip Kingston (second from right) were among the speakers Tuesday morning outside Robert E. Lee Elementary. (Photo courtesy of DISD)

As a graduate of the Booker T. Washington High School for the Performing and Visual Arts, I’m used to people raving about my alma mater. But this week was the first time I’ve heard people rooting for my elementary school.

I left Robert E. Lee Elementary in 1986, and I honestly haven’t given it much thought since then. Fortunately, it’s on the minds of a lot of people in its East Dallas attendance zone these days. On Tuesday morning, the campus hosted an open house with two purposes: showcase the support the school has already received and generate more of it. The event drew a number of big names, including DISD Superintendent Mike Miles, two DISD trustees, and two members of the City Council.

A lot has changed since my days at Lee. The school has added a dual-language program, an organic garden, and a rock-climbing wall. But there have been negative changes as well. Enrollment is dwindling, especially when compared to Lee’s neighbors to the north and east, Stonewall Jackson and Lakewood Elementary. Check out some of these statistics reported by Eric Nicholson of the Dallas Observer:

The neighborhoods surrounding those three campuses are largely the same, so there shouldn’t be such drastic differences in their enrollments and demographics. Adam Miller, whose 3-year-old son will enroll at Lee in a few years, thinks it’s a problem of perception.

Miller and his wife, Natalie, have started raising money for an initiative they’re calling Project Refresh. Through the Woodrow Wilson High School Community Foundation, the Millers want to finance campus beautification efforts that will bring more pride, and more people, to the campus.

Although Stonewall Jackson and Lakewood get plenty of publicity, Miller said, not enough people in his neighborhood know about the positive things going on at Lee, including the dual-language classes and the plans to bring an International Baccalaureate curriculum to the school.

“Part of this project is drumming up interest in Lee,” said Miller, who can be contacted via projectrefreshREL@gmail.com. “When people see things going on with the grounds, they’re going to get curious about what’s going on inside.”

Home values have skyrocketed since my family and I lived less than a block from Robert E. Lee. There are 36 houses for sale within a half-mile of the school, and their median list price is about $600,000. When you’re paying that much for a mortgage, that doesn’t leave a whole lot of money for private-school tuition. So improvements at Lee should be welcome news in the neighborhood.

“I feel like the city is now recognizing the property values and demand for better schools in East Dallas,” said Dave Perry-Miller associate Chris Pyle, who attended Tuesday’s kickoff event. “Robert E. Lee should soon be on par with Lakewood Elementary and Stonewall Jackson.”