This stunning Cape Cod two-story is an uncommon oasis in the heart of Dallas. As you pull into the driveway of 8206 Inwood Road, marketed for $2,865,000 by  J.L. Forke and Jennifer Shindler, any visual or audible reminders you’re in a bustling city begin to fade into the background.

This completely re-imagined home melds the charm of its original 1941 structure with renovated and expanded spaces (more than 60% of the home is new) designed for the most discerning taste. The current owners spent over two and a half years working very closely with architect/builder Chad Dorsey of More+Design Build creating a special place that not only fit their growing family’s needs but also built a home that reminded them of their Massachusetts’ roots. With its bleached hardwood flooring, beamed ceilings and walls of glass overlooking lush, three-quarter-acre grounds, the Inwood Road estate includes formals, great room, library, four bedrooms, four full and one half baths, chef’s kitchen, game room, guest house, screened, pool, three-car garage, storm shelter and guest house.

“The original 2,500 square-foot residence was taken down to the studs,” Shindler says. “More+Design reconfigured it into this spectacular home now boasting 6,937 square feet.”

“Because it was completed in 2014, it really is like a new home,” Forke adds. A crushed granite motor court welcomes guests to a gracious entry. Inside, the bright foyer is flanked by chic living and dining rooms washed in natural light and perfect for elegant gatherings with family and friends. 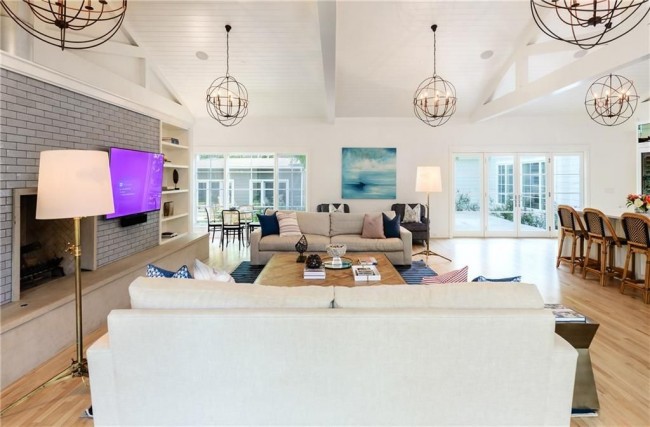 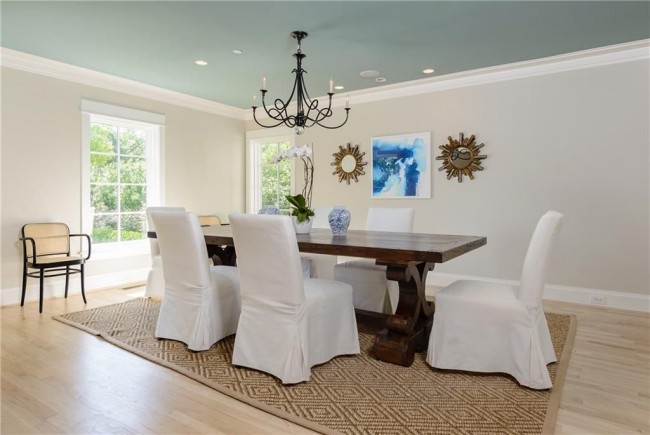 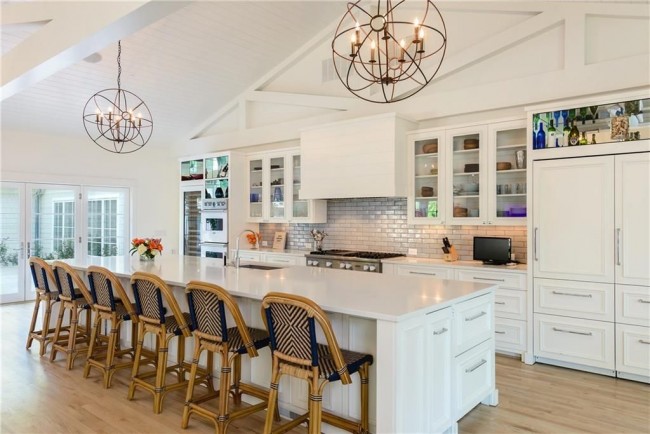 With its beamed ceilings, shimmering fireplace, six iron orb chandeliers, and a wall of French doors that open to the outdoors, the dramatic great room is sublime. An expansive center island gracefully connects the room with an open gourmet kitchen outfitted with classic white cabinetry and countertops, and artisan tile. An enormous walk-in pantry, two Miele dishwashers, and professional Viking and Sub-Zero appliances make the kitchen truly chef-worthy. 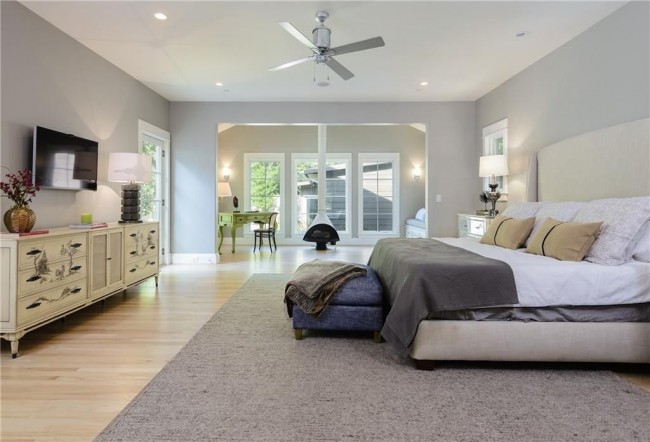 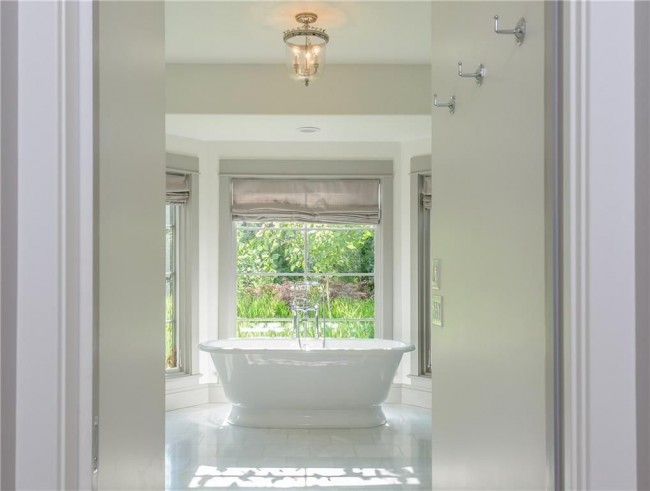 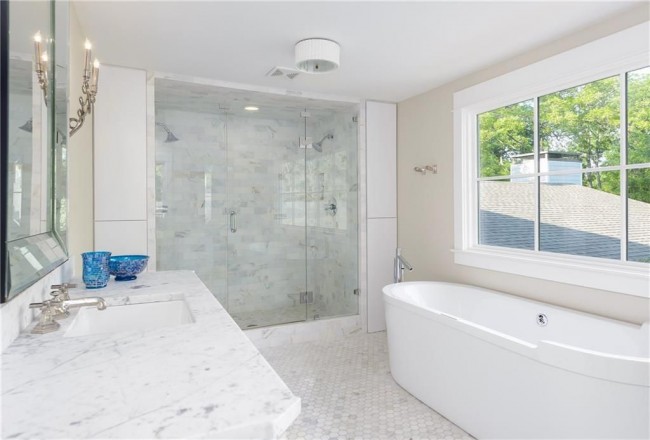 The downstairs master wing is a luxe retreat with more than 1,160 square feet, and includes a sitting area with fireplace and bath overlooking a private garden. Upstairs, a game room with full en suite bath is perfect for a fifth bedroom, media room or nanny’s quarters. 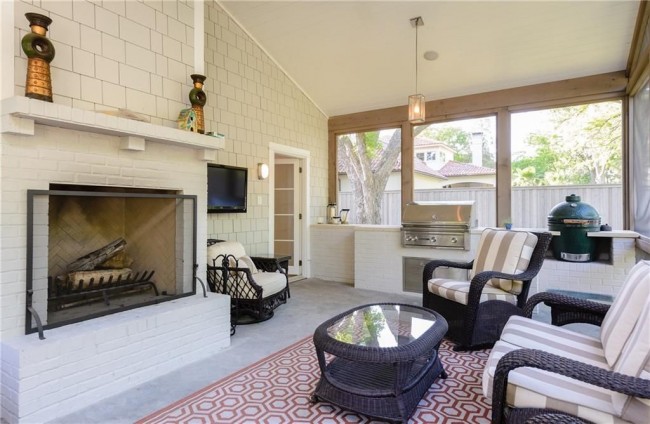 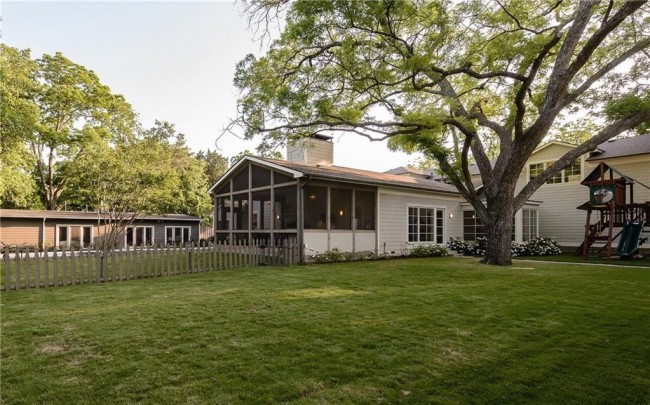 Outdoors, a screened-in porch with grilling station and fireplace offers views of the back lawn, pool and spa. The 1,000-square-foot guest house features a living room with fireplace and cathedral ceilings.

The rolling hills and mature trees that characterize the Vaquero Estates make the development seem as if it’s nestled in the country rather than the middle of two major cities.  Perhaps that’s why a home in this gated golf community is so coveted by discerning business executives, celebrities and professional athletes. The French Provencal estate located at 2252 King Fisher Drive (2252KingFisherDrive.com), is the epitome of laid-back luxury, and is offered for $5,750,000 by J.L. Forke and Jennifer Shindler of Dave Perry-Miller Real Estate.

“The home sits on 3.8 acres and can’t be seen from the street,” J.L. Forke says. “A gated, winding drive meanders through roses and mature trees. With native grasses, wildflower fields and perennial gardens planted with 2,500 tulips and daffodils, exploring the grounds feels like a day trip to the wine country.”

The sellers worked with architect and builder Aaron Angle for two years to curate this timeless masterpiece. Inspired by homes in Southern France, it is adorned with 200-year-old French antique tile floors and five artisan-crafted fireplaces. Within its 10,572 square-foot interior are four living areas, five bedrooms, five full baths, media room and a five-car garage. An elevator accesses the underground wine grotto with a copper bar, fireplace and a lounge perfect for after-dinner gatherings.

“Residents will also enjoy relaxing and entertaining outdoors,” Jennifer Shindler says. “The outdoor living room and kitchen features a fireplace along with views of the resort-style pool, terrace, huge lawn with Bocce Ball court, and more.”

Vaquero has a 24-hour guarded gate and a Tom Fazio-designed golf course and club that offers dining, a spa and gym, pool and fishing lake.

Parents have their choice of Keller ISD or the public charter school Westlake Academy, an International Baccalaureate World School serving K-12 students. Children living in Westlake who wish to attend the academy are granted automatic admission, bypassing a waiting list of nearly 2,000 students vying for one of the highly coveted spots.

Friends and clients of J.L. Forke who tuned into last month’s Stand Up to Cancer telethon may have recognized a familiar face on their TV screens. The Dave Perry-Miller associate was volunteering on the red carpet outside the Dolby Theatre in Hollywood.

“I basically greeted every celebrity, every patient, and every scientist who walked the red carpet and showed them their stopping points for photos,” he said.

That’s a natural assignment for Forke, who is known for his sense of humor and engaging personality. But those attributes were not the major factors in his participation in the 2012 and 2014 editions of the telethon. He is also a survivor of stage IV non-Hodgkin’s lymphoma.

The year of 2010 was one Forke will never forget. The first indication that something was wrong came in April, when he suffered from persistent migraines, jaw pain, and arm pain. By the time his cancer was diagnosed in May, it looked like he was fighting a losing battle; he was placed on total life support.

“My doctor asked me, ‘Do you know football?’” Forke recalled. “And I said, ‘Yeah.’ And he said, ‘Well, we just started the fourth quarter, and we’re down by four touchdowns.’ I said, “Uh-oh. I love football, and that’s bad!’”

The chemotherapy was effective in killing the cancer, but various side-effects kept Forke at Baylor University Medical Center through September. Fortunately, he had the help of an amazing group of doctors, nurses, and staff, who he hopes to thank with a celebration on the fifth anniversary of his being cancer free. (Forke promised his oncologist, Dr. Yair Levy, that the affair will include margaritas and a live band.)

It also didn’t hurt that Forke — who is co-chairing Saturday’s Preservation Dallas Fall Architectural Tour along with colleagues Ralph Randall and Madeline Jobst — had a steady stream of visitors brightening his room each day.

“The nurses, who became my family, told me they had never seen that many visitors in their careers, because I not only had my family, I had my friends, and I had all of my real estate family coming too,” said Forke, an agent in Dave Perry-Miller & Associates’ InTown office who has been a Realtor since 1998.

Although he got to interact with actor Jordana Brewster and Survivor winner Ethan Zohn during the telethon, “it was actually more exciting to meet some of the patients who were in the battle and to meet fellow survivors, who make me less worried my cancer will return,” Forke said. “I came away from it really inspired and motivated to do more for the cause.”

Forke recently ran in the Komen Race for the Cure to support seven friends. And he’d like to organize a watching party for the next Stand Up to Cancer telethon at an outdoor venue such as Victory Plaza or Klyde Warren Park. He said the watching party that was heralded as the largest during last month’s event was based at a bar in Pittsburgh.

“I just thought, ‘Really?’” Forke said with a laugh. “This is Dallas. We can do better than that.”

This is one in a series of articles about interesting aspects of our associates’ lives. The previous installment was about Matthew Edwards’ dual careers in real estate and fashion.