Getting ready for the new school year looks different for many families this year. Regardless if classes are virtual or in-person, one thing that can be certain is making sure the kids take on every school day with a good meal. That means having the perfect kitchen space for breakfast, lunch, snack time and dinner.

Streamline your back-to-school routine with these 10 delectable kitchens.

Sunday, May 21st, marks the 10th anniversary of Dave Perry-Miller Real Estate. The brand, which was absorbed into the Ebby Halliday Family of Companies a decade ago, has steadily risen in the ranks of area brokerages over a relatively short period of time. It had ascended to the number one spot for total sales volume in Dallas proper by the end of 2016 and has maintained this placement through Q1 of 2017 (according to MLS data for Areas 11, 12, 14, 16, 17, 18 and 25).

To celebrate the milestone — an impressive achievement given the company’s formidable competition and the prolific nature of the industry – agents will be holding open 140+ homes citywide, as well as handing out token gifts to attendees as a “thank you” for supporting the brand.

“In its infancy, Dave Perry-Miller Real Estate survived the 2008-2010 market downturn,” said Ebby Halliday CFO Ron Burgert, “and continued not only to grow, but to thrive. This is a testament to the caliber and resolve of the many agents who have remained loyal through the years. They’ve worked hard to make sure clients understand the brand’s core values of service, excellence and unparalleled market knowledge. Once you get someone to experience this difference for themselves, they typically make the shift to seeing a DPM agent as their ‘agent for life.’”

To promote the open home tour — extending from Southlake to Rockwall, and Prosper to South Dallas — the firm has taken out five digital billboards and two full page ads in the Dallas Morning News and ramped up its email efforts and social media presence. For a complete list of homes that will be held open today, visit openhouse.daveperrymiller.com.

We love to tout our agents’ professional contributions to the real estate industry, for there are many. Those are important and all, but at the end of the day, how an agent invests their personal time is often what is most endearing about them. For years, Peggy Millheiser has given of her time freely to others– while balancing it with a successful real estate business — and it’s this lifestyle of service that had the attention of her alma mater (Finch College) earlier this year.

The Finch College Alumni Association Foundation Trust annually presents The Jessica (Finch) Cosgrave Lifetime Achievement Award to honor today’s outstanding alumnae. Peggy was one of five recipients at the 22nd annual award show in May, hosted at the Cosmopolitan Club in NYC. 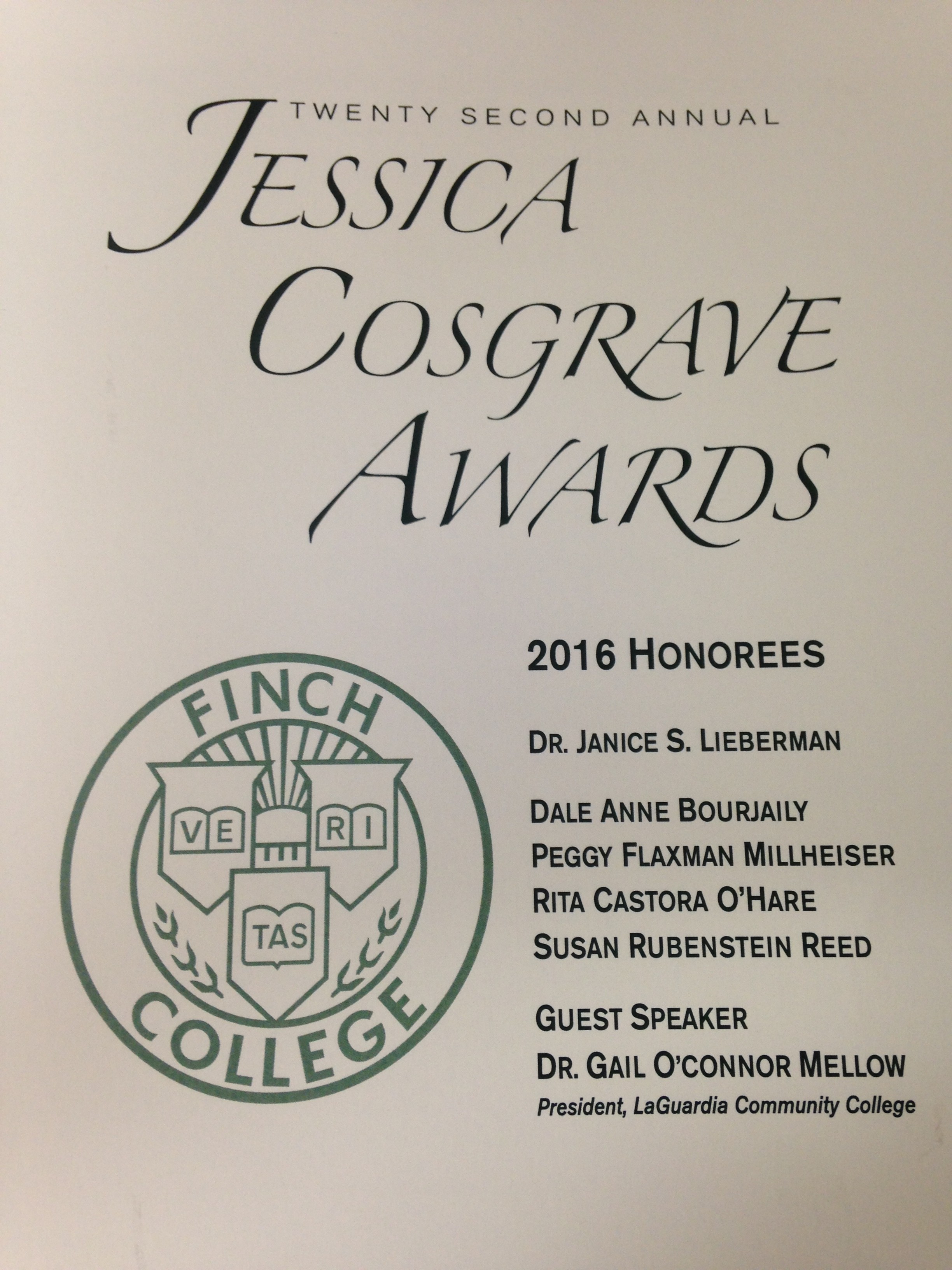 Finch was a baccalaureate women’s college located in the borough of Manhattan. It began as a private secondary school for girls and later developed into a liberal arts college. Finch closed in 1976 for various reasons and its enrollment records were passed to Marymount Manhattan College, but the strong alumnae base formed an association in 1993 to keep relationships going and to preserve the school’s history. Peggy has maintained her involvement with Finch since graduating in 1975 with a BFA degree.

Nominations for the award are solicited from all Finch alumnae. A Finch College alumna is defined as one who attended the college and remained in good standing as a student.

CRITERIA FOR NOMINATION OF A CANDIDATE

Achievement must reflect a significant contribution to public life, the arts, business and/or volunteer work, which candidates have done in their community throughout the country or world. Nominees should be a respected and distinguished Finch Alumni who have demonstrated continued devotion to the Finch College motto Ineamus Meliora (strive toward the best), whose extraordinary achievement deserves acknowledgment and recognition.

“Peggy, a fourth generation Texan and resident of Dallas, where she was born and raiased, read about Finch College in a brochure. It told about art history courses, which she wanted. She arrived at Finch in 1972… She met her husband, Dave, in her senior year. They were married two years later and stayed another seven years in New York, where Dave was working. He had a business offer in Dallas so they moved, settled down and raised a daughter and son there.

When her children were in elementary school, Peggy learned there was no creative writing course and no summer reading course. This bothered her so she created the courses herself…

Peggy’s humanitarian efforts stretched further in the 1980s when many Russian immigrants were coming to the states and needed places to stay. Peggy and her family offered their help…, and (they) looked after a Russian family for two years.”

Peggy’s educational efforts extended well through her kids’ time in school, and included board/leadership roles in various PTAs. As you look at her lengthy Curriculum Vitae through the years, you’ll see concurrent passions for the arts, her fellow man and her faith also run deep.

She and Dave also have an adventurous side – they took temporary leave of Dallas from 1996-1999 to live in the foothills of the Andes mountains in Santiago, Chile, where Dave pursued a business opportunity.

Amazing that with all this, she has still found time for a successful 17-year real estate career with Dave! Congratulations on this great honor, Peggy!

We’re thrilled to announce Kay Hammond has joined the Dave Perry-Miller Real Estate family in our Highland Park office. If you know Kay from previous real estate encounters, then you know she has a reputation as a matchmaker. Just give her your wish list, and she’ll find the right one for you — home, that is.

Making love connections between buyers and sellers is a rewarding experience for both Kay and her clients. Throughout her impressive real estate career, which includes 28 years as owner of her own leasing company (Apartment Home Search), all have learned to rely on her instincts. Kay knows the market top to bottom, and side to side. She enjoys telling people about what a wonderful city Dallas is and all it has to offer – including its unique, close proximity to mountains and beaches from DFW and Love Field.

When Kay was in her leasing phase, she worked closely with Ameri-Corp, the forerunner to Altair Global. They awarded her the Star of Excellence, the only time in its history it’s been given to an individual!

Kay hails from Duncan, OK, where her family moved when her father was drafted. In addition to being a REALTOR®, she’s raised two realtors. She also loves being with friends and family (she and her husband have 16 grandchildren between them), reading and attempting to play golf.