Sunday, May 21st, marks the 10th anniversary of Dave Perry-Miller Real Estate. The brand, which was absorbed into the Ebby Halliday Family of Companies a decade ago, has steadily risen in the ranks of area brokerages over a relatively short period of time. It had ascended to the number one spot for total sales volume in Dallas proper by the end of 2016 and has maintained this placement through Q1 of 2017 (according to MLS data for Areas 11, 12, 14, 16, 17, 18 and 25).

To celebrate the milestone — an impressive achievement given the company’s formidable competition and the prolific nature of the industry – agents will be holding open 140+ homes citywide, as well as handing out token gifts to attendees as a “thank you” for supporting the brand.

“In its infancy, Dave Perry-Miller Real Estate survived the 2008-2010 market downturn,” said Ebby Halliday CFO Ron Burgert, “and continued not only to grow, but to thrive. This is a testament to the caliber and resolve of the many agents who have remained loyal through the years. They’ve worked hard to make sure clients understand the brand’s core values of service, excellence and unparalleled market knowledge. Once you get someone to experience this difference for themselves, they typically make the shift to seeing a DPM agent as their ‘agent for life.’”

To promote the open home tour — extending from Southlake to Rockwall, and Prosper to South Dallas — the firm has taken out five digital billboards and two full page ads in the Dallas Morning News and ramped up its email efforts and social media presence. For a complete list of homes that will be held open today, visit openhouse.daveperrymiller.com.

There is no better venue to host a gathering of Dallas’ most elite, service-oriented real estate agents than Dallas’ most elite, service-oriented hotel. The Dave Perry-Miller Real Estate 2016 Top Producers Award Luncheon was held on Friday, February 18, at The Ritz-Carlton Dallas in Uptown. Sales managers, agents and support staff from all five area offices convened in the Cypress Ballroom — along with senior executives from Ebby Halliday Real Estate, Inc., and a handful of valued vendors — to toast with mimosas and dine on Teen Romaine Salad, Moroccan-spiced Grilled Chicken Breast with Sauteed Kale and Quinoa, and Citrus Twist Cheesecake. 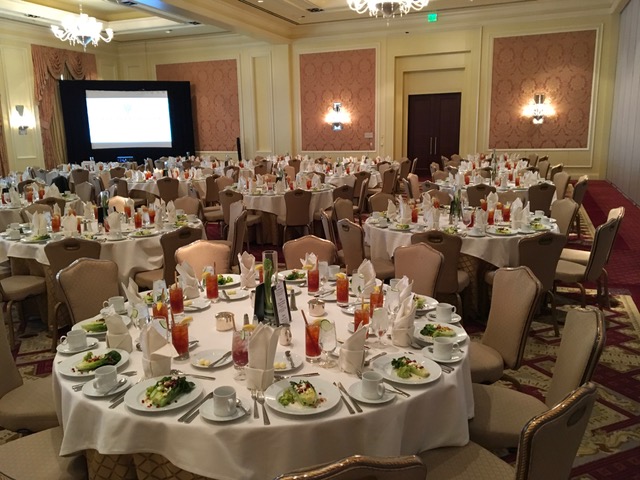 After lunch, Ebby CFO Ron Burgert kicked off the awards portion of the event with a recap of 2016. The firm did $2.1 billion in sales volume, he announced. He also reiterated the strength of and bright future for the brand. Ebby CEO Mary Frances Burleson also congratulated agents on another remarkable year, and hinted of the presentation to come by retelling a personal Ritz-Carlton memory that has stayed with her for 15+ years.

Agent Sharon Quist, herself a homeowner at The Ritz-Carlton, introduced the highly anticipated guest speaker, The Ritz-Carlton Dallas General Manager Roberto van Geenen.  Mr. van Geenen entitled his talk “Memorable Customer Service” and highlighted the high standards this luxury hotel brand has in place to keep guests satisfied and loyal. He acknowledged many parallels in the way The Ritz-Carlton staff treats guests and the way Dave Perry-Miller Real Estate agents treat clients, and left his audience freshly inspired by his industry-leading insights.

After Mr. van Geenen concluded, Robb Puckett, Sales Manager of the Highland Park Office took the podium to begin handing out awards to his 2016 Top Producers (pictured below):

Next, Becky Connatser, Sales Manager of the InTown Office, announced her Top Ten Producers (pictured below):

Finally, Charles Carneal, Sales Manager of the Preston Center Office, rounded out the afternoon with his Top-Ten list (pictured below):

Puckett had this to say after the ceremony was over. “Our vision as a leadership team is to inspire our associates to provide clients with the level of service Mr. van Geenen and The Ritz-Carlton provide their guests. Quality is a value that transcends time and one of the hallmarks that makes Dave Perry-Miller Real Estate the success it is today. Today’s luncheon to recognize our associates for their phenomenal work and achievements, is never tiring and sets the stage for a prosperous 2017.”

Congratulations to all the winners!

When is status quo ever a good thing in business?  When your firm’s “more of the same” looks like “continuous growth and change,” that’s when!

“Over the past six months, the firm has seen an 8% gain year-over-year in sales volume, and units sold are up more than 9%,” Burgert said. “No small wonder, when 1,000 people a day are moving into Texas.”

The forecast looks strong well into next year, he also predicted. Hardly status quo in the typical sense, and yet very much “status quo” for this dynamic Ebby company!

Up next was John Crawford, President and CEO of Downtown Dallas, Inc., a private non-profit organization serving as the primary advocate and champion for Downtown. Crawford spent his time encouraging the group by citing dream after impossible dream that has been realized in our beloved city. He started with an anthemic video entitled “A City Is a Poem,” which artfully captured how much Dallas has changed.

“We have successfully transitioned from a one-dimensional central business district to a multidimensional “Live, Work, Play” community, in every sense of the phrase,” Crawford said.

And he should know. He has served on the planning committee since its inception more than 30 years ago, so he has witnessed firsthand and been a critical player in how Downtown Dallas has blossomed — seemingly overnight to anyone still saddled with the misguided perception that nothing’s going on down there.

Today it’s is the only true urban center in North Texas, Crawford continued.

“Every possible existing building has been adapted for residential living — some 10,000 people now live Downtown — and we’re at a point where all that’s left to do is build. The demand will certainly support this,” Crawford said. (See Burgert’s jaw-dropping relocation statistic above.)

Since 2007, $5 billion has been invested in Downtown, he continued, and $3 billion more will be spent over the next five years. Within the 15 neighborhoods that make up the area, more than 90 developments are currently underway, including 5,000 residential units to be added, plus 60 restaurants and 40 parks and greenspaces/plazas. The current residential inventory is 90% leased. Staggering!

Areas for improvement, he added, include walkability, car/bike sharing programs and convention business. DART has played a huge role in making life without a car even a consideration – it’s now the largest light rail network in North America. And Downtown already has 70 bike racks to help make the bike-share idea come to pass. ZipCar is already here, but could be doing better. Crawford also indicated that if the bullet train to Houston raises full funding, the station would be just south of Downtown – another coup for the city. Convention Center improvements would also further enhance our economy, and are in the works.

“All in all, there’s much to be proud of,” Crawford said. “We’ve made a lot of progress on our strategic plan, but there will always be more to do.”

Ebby CEO Mary Frances Burleson concluded the meeting with an anecdote from a recent trip. At a recent Realty Alliance gathering, she said brokers from across the country expressed their envy of us and our relocation business.

“It’s a great time to live in Dallas. We all need to keep planning ahead, just like John and his team have done, and we’ll be alright.”